Dosage: The plant is collected when in flower.

External Liniment for muscular-Skeletal problems like Rheumatism and  Gout According to Doctor Thos Blair, he found Fleabane a very valuable therapy in passive hemorrhages without fever, especially in uterine hemorrhage, and to a lesser degree than ergot, he believed that it had an action upon unstriped muscular tissues.  Blair note that it has a local application that acts somewhat like turpentine, but is less irritating. It has application in uterine, vesical, and intestinal hemorrhage, chronic diarrhea, gonorrhea, leucorrhea, bronchitis, phthisis, tympanites, and irritation from vesical calculi.

Matthew Wood, in addition to his recommendation that fleabane can be used for hemorrhage also states in his book, “The Earthwise Herbal” that Erigeron is a “very intense stimulant that increases the action of the kidneys, removing gravelly, earthen deposits.”  He adds that it can aid in stopping the flow of excessive urine from the kidneys.

Matthew Wood also refers to William LeSassier, who recommends erigeron is cases of a microorganism induced case of “profuse diarrhea”.  William LeSassier believes that the mechanism of action for Erigeron’s effectiveness in this case, is because of its stimulant properties.  Stimulants directly oppose the organisms that cause the profuse diarrhea, by decreasing the endotoxins created by the offending organism and increasing tissue life of the host.  It can also be burned to wart of insects.

Erigeron is an herbaceous plant whose active growing period extends from spring to mid-summer.  I can be found in woods, fields, roadsides and waste places and ranges in height from a half a foot to two and a half feet tall.  Its leaves alternate and are simple and can be described as heart shaped.   According to the Connecticut Botanical Society, on common fleabane, the base of the leaves clasp the hairy stem, this is the characteristic that distinguishes common fleabane from the similar species daisy fleabane and prairie fleabane (Erigeron strigosus). The heads of the plants flower in spring and contain up to as many as 35 heads with many numerous yellow or pink florets.  One head can sometimes contain as many as 400 blooms that are less than an inch in diameter.  It can be wildcrafted in abundance during flowering season which is usually July, August and September. Young leaves and seedlings can be cooked or dried for later use.  Its leaves are edible and can be eaten in salads or cooked as a vegetable like spinach. They contain the minerals calcium, phosphorous, and potassium in fairly high proportions.  I had the opportunity to taste erigeron myself during an herb walk at the Eclectic School of Herbal Medicine.  I thought that the leave had a peppery taste and have since used small amounts to spice up salads.

Culpeper, in his book “The Complete Herbal” from the 17th century, called the plant “Flea-wort” because the seeds looked like fleas both in color and brightness but turned black when the plant grows old. He described the root of the plant as “not long, but white, hard and woody.”  He notes the edible nature of the plant when taking about having the seeds fried to treat the belly and the mucilage of the seed made with rose-water and sugar for burning fevers.

According to the U.S. Department of Agriculture’s Assistant in Drug and Medicinal Plant Investigations, Botanical Investigations and Experiments, Bureau of Plant Industry, Alice Henkel, in her 1904

Bulletin No. 188 entitled “Weeds Used as Medicine”, in 1904, Canadian Fleabane had the common name “blood stanch”, which indicated the use of this plant for the “arresting of hemorrhages from various sources and the bleeding of wounds.”  She also notes that it was useful for diarrhea and dropsy.  One interesting fact that she note in her 1904 bulletin is the prices of commonly used medicinal herbs.

She indicates that the price per pound for erigeron or fleabane in the United States, in 1904, ranged from 6 to 8 cents per pound.  She describes how it was used in the U.S. as a fresh herb on distillation which yielded a volatile oil sold as “oil of fleabane”.  At that time the entire herb was used as medicine and was gathered during flowering period and carefully dried.  Her description is as follows: “it has a faint, agreeable odor and a somewhat astringent and bitter taste.” 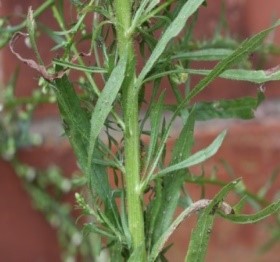 She describes fleabane as an annual weed belonging to the Aster family with a stem, which was bristly-hairy, or sometime smooth which varied in height, according to soil type and condition.  Sometimes only 3 inches high in favorable soil but could be up to 10 feet high. The plants that grew larger branched near the top and the leaves usually hairy, scattered along the stem and narrow with unbroken margins with the lower ones slightly toothed.  White flowers were produced between June and November and were numerous containing an abundance of seed.

During my research on the history of Erigeron, I found many turn of the century documents describing effective medicinal uses.  I discovered many wonderful fathers of herbalism and eclectic medicine.  I found myself fascinated by the information that I learn while reading their documents.  To my surprise, the discovery that hit me the hardest in an emotional way was that our federal government once promoted and encouraged the use of herbs and weeds as medicine.  I read through almost the entire Bulletin written by Alice Henkel, Assistant in Drug and Medicinal Plant Inventions from the Department of Agriculture and felt a sense of deep betrayal because in this country, we once had knowledge of inexpensive and effective ways to treatment ailments with common natural remedies.  I am not insinuating that modern medicine has not had wonderful discoveries that have led to life extension and health for so many Americans and people around the world, because I know it has, but it seems to me, after further research, that it has also caused much harm in the pursuit of profit.  As I contemplated this bulletin further and read through other old documents, I do believe that modern medicine is wonderful in the treatment of acute illnesses and injuries but falls short in the care of chronic ones.

I never realized how far we have drifted in the field of medicine from our origins and could benefit tremendously from rediscoving the wisdom of many of the herbalist that came before us.  I could only imagine how medicine was practiced before the development of the American Medical Association and for-profit pharmaceutical companies, before the invention of commercial farming practices and the “science” of newly created GMO products, before the invention of Industrial Animal Factories and concentrated animal feeding operations, when food, herbs, and weeds were our medicine and people where not commodities but humans and individuals.

I was conflicted.  I was someone who spent my career in medicine, working in hospitals but now, longing to return to basic herbal medicinal treatments and caring, family, country doctors, that are now seen by most of the established medical community as a “fringe, alternative”, practiced only by those without education or abilities for mainstream medical school, on patients who think they have exhausted their options in traditional medicine and too ignorant to know the difference.  It saddens me and I now have a stronger desire and motivation to somehow change this view and the future course of this direction.  Becoming a Clinical Herbalist was my first step, not only in my personal endeavor to return to my roots and heritage but to initiate this change. 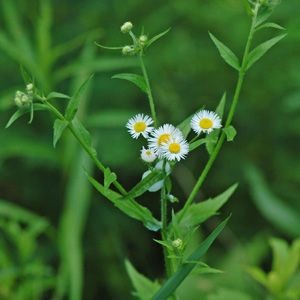 According to Felter and Llyod, erigeron was used for watery diarrhea from chorea. They recorded that Oil of erigeron, was not astringent to taste but acts as an astringent and has a styptic influence which is why it is good for local application for hemorrhoids and small wound bleeds but should be combined with oil since it is too acrid to be used alone.

According to King’s American Dispensatory, Felter & Lloyd, an infusion can be given hot or cold for the stomach. A stuff of powered leaves can be used for epistasis and syrup is effective for cough, pneumonia and blood tinged bronchial expectoration.

In traditional North American herbal medicine, Canada fleabane was boiled to make steam for sweat lodges, taken as a snuff to stimulate sneezing during the course of a cold.   Today, it continues to be valued for its astringent properties and for its use in the treatment of gastro-intestinal problems such as diarrhea and for the effective treatment of bleeding hemorrhoids as an anti-rheumatic, diuretic, emmenagogue, styptic, and many other traditional uses.

According to older literature quoted, Erigeron canadensis has many medicinal benefits.  There needs to be further researched for its medical properties.  I could not find primary sources for current research on Erigeron canadensis but did find references to three clinical recent trials mentioned in the blog on the website “Herbs-Treat and Taste”, in an article entitle “HORSEWEED OR FLEAWORT – NORTH AMERICAN HERB: HISTORY, USES AND HEALTH BENEFITS OF HORSEWEED”.  There was no auther listed but I have listed the website below.

The author also notes that a study by Beata Olas et al. (2006) “Antioxidant and antiaggregating effects of an extract from Conyza canadensis on blood platelets in vitro” also found that  “the natural polysaccharide extract from Conyza canadensis has anti-aggregatory and anti-oxidative activities and therefore may be beneficial in the prevention of peroxynitrite-related diseases, such as cardio-vascular and inflammatory diseases.”

The last study they address wason the plant extracts and conducted in Hungary by Boglárka Csupor-Lôffler et al.  “Antiproliferative Constituents of the Roots of Conyza canadensis” (2011).  The study found that there was “considerable cell-growth inhibitory activity against human cervix adenocarcinoma (HeLa), skin carcinoma (A431) and breast adenocarcinoma (MCF-7) cells”.

Do not take during pregnancy or if allergic to ragweed, daisies, and related plants: Canadian fleabane may cause an allergic reaction in people who are sensitive to the Asteraceae/Compositae plant family. Members of this family include ragweed, chrysanthemums, marigolds, daisies, and many others.